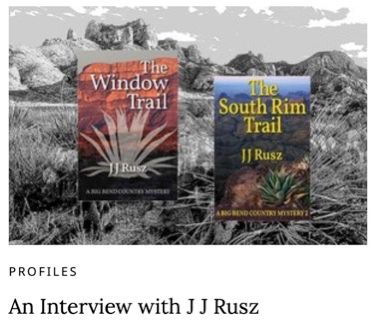 J J Rusz discusses The Window Trail and The South Rim Trail in an interview with Charlotte Canion for Indie Beacon Radio (February 12, 2019 from Alpine, Texas). Rusz explains his experiences as an author, his process of writing, and the ideas behind the Big Bend Country Mystery series. (30.27 minutes / 12 February 2019)

A Note from the Author 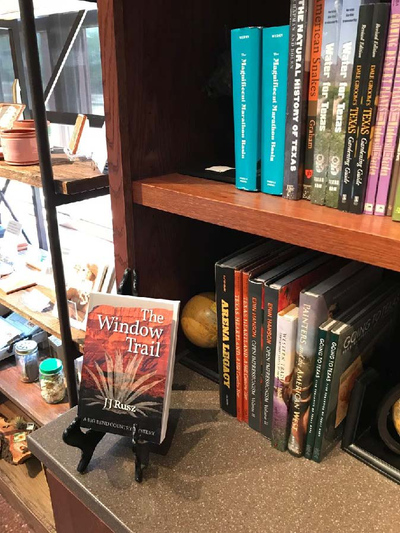 I fell in love with Far West Texas the first time I saw it in November 1992. I was heading south on Highway 385 toward Big Bend National Park, the sun already setting in a November sky ablaze in color. For as far as the eye could see—nothing but mesas and mountains and Chihuahuan desert. I want a place here, I thought to myself, so I can return again and again. More than a decade later, I acquired a small house in the mountains south of Alpine, eighty miles north of the park. Quick drive on a good Texas road.

Until then, though, I visited Big Bend country annually, even organizing trips to the park for faculty, staff, and graduate students from the University of Texas at Austin, where I taught. We sidestepped rattle snakes on the South Rim, got lost once on the east side of the park, explored the River Road and Mariscal Mine, soaked in hot springs, dined at the 12 Gage in Marathon. Good times all, even when it rained or snowed.

Sometimes I explored Big Bend on my own with just a camera. In 2002, photographing the treacherous pour-off at the end of the Window Trail in the national park, I thought not a bad place for a murder. That seed germinated for years while I worked in Austin and wrote a string of successful textbooks.

To relax, I would read mysteries set in the southwest, none better than Tony Hillerman’s Leaphorn and Chee series, with its admirable attention to Native American people and culture. Other authors of mysteries and thrillers I’ve enjoyed (and learned from) include Margaret Coel, C. J. Box, Craig Johnson, R. Allen Chappell, James Doss, Rich Curtin and Allana Martin, to name but a few.

The next step was to imagine a mystery series of my own—a full-time project now. The books have intricate plots, good-natured characters, a little romance, and (I hope) a dose of humor. If you like mysteries or the American Southwest, you may enjoy them.